BIG WIND AND NO BREEZE AT CONFEDERATE ADMIRALS’ REGATTA 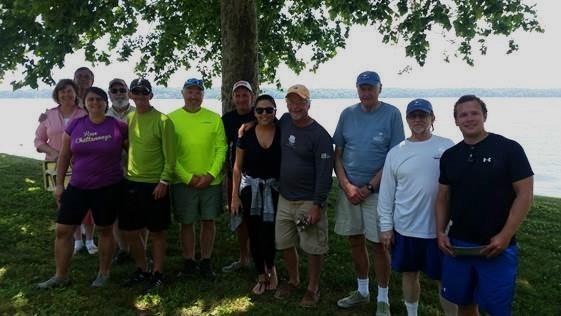 Memorial Day weekend at Muscle Shoals Sailing Club started out hot and sunny with a nice breeze that we all anticipated for the Saturday and Sunday races.  By the time we had finished the Skipper’s Meeting and lunch, the breeze was beginning to pick up to a nice Southeasterly.  Our flawless PRO, Gar Bouse, had set a perfect windward-leeward course two times around.  By the time we had our first start, the wind had puffed up to around twelve knots.  Then the skippers had to decide whether to take the route closer to shore where there is usually a lift or to go up the middle where there was more wind.  It didn’t seem to make much difference which route you took since we all met at the windward mark about the same time and we were all competitive.  Going downwind was a different story.  The shifty winds started taking its toll on the boats that were not quite as skilled on their spinnakers.  As we rounded the leeward mark, the boats that could douse their chutes the best and trim windward surged further ahead.  There were puffs at eighteen to twenty as the wind built higher.  Some boats were going into survival mode but fortunately, no one went over.  The wind stayed up the duration of our three races on Saturday.

We were all satisfied with the challenging workout and were ready for beer and food.  Po’ Boys Cajun Catering fixed a great dinner for our enjoyment.  Our local micro brewery, Singing River Brewery, prepared a couple of small kegs of “Handy’s Gold”(W.C. Handy, father of the blues was born and raised in Florence, AL) for our enjoyment.  The Irish band got carried away and stayed up partying until 3 AM.  This was to the chagrin of our camping racers who were also trying to get some rest for Sunday races.  But, alas, there were no Sunday races.  The dawn brought total stillness.  There was no breeze and the Regatta was called at 11:15 AM.  We had lunch and awards which consisted of silverware from the USS Saratoga.

Thanks to all the travelers from Chattanooga, Birmingham, Atlanta and Lake Charles, LA.