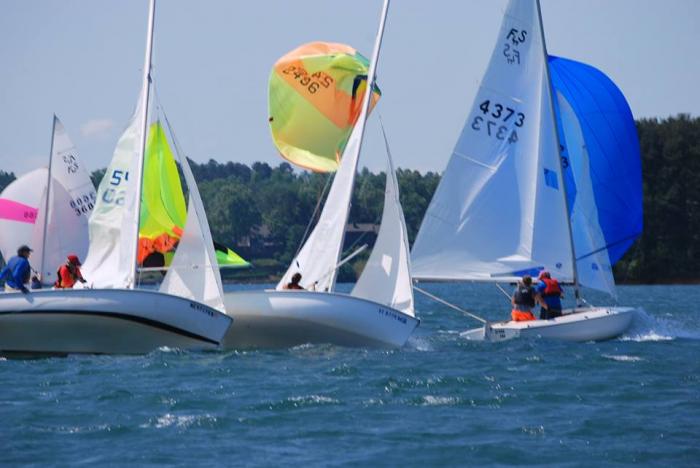 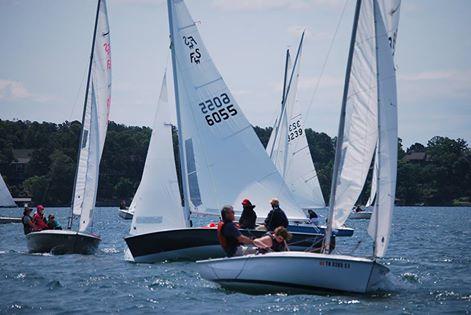 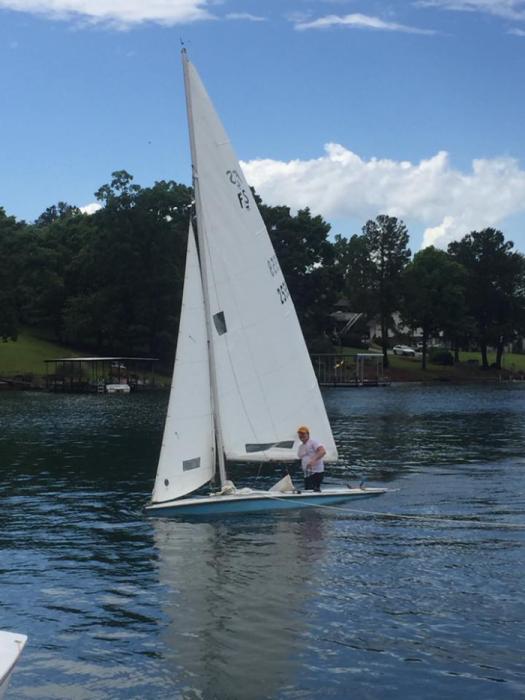 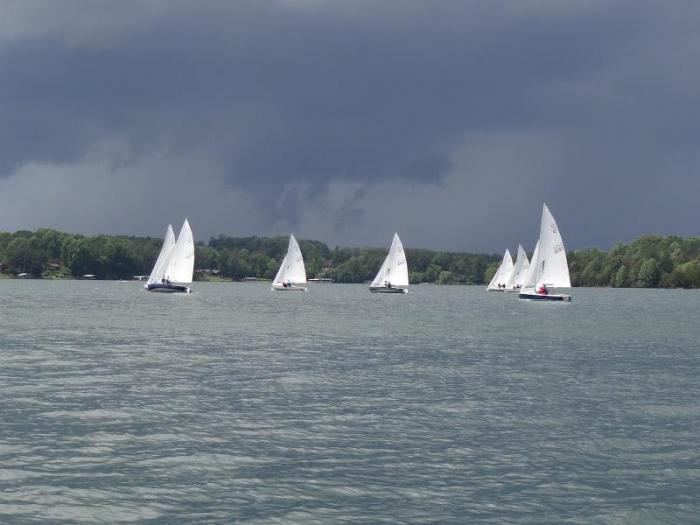 A record 25 Flying Scots showed up at the Keowee Sailing Club in Seneca, South Carolina for the 2016 Grits 'n Haggis Regatta.  The event, held on May 21-22, also served as the 2016 Dixie Lakes District Championship Regatta.  Only 2 races were held on Saturday, due to the effects of a violent squall after the end of the second race.  PRO Jake Kohl had wisely shortened that race and sent the fleet scurrying for cover from a fast approaching squall which had unexpectedly turned more than 90 degrees to the right and headed due south to our venue after passing well to the north and west of Lake Keowee earlier in the afternoon.  Most of the competitors were well aware of what transpired at the ACCs last year when a monster squall hit the racing fleet, so almost everyone at Lake Keowee was wearing life jackets, and several skippers had wisely turned into the approaching storm, taken down their sails, raised their centerboards, and they remained upright when the squall hit.  With about 10 boats already at the dock, and with most of the mid-pack group almost home, the southbound freight train met the 15mph breeze moving northward right off the end of the KSC docks.   8 boats were almost instantly capsized, 4 of which turned turtle, and another remained upright but lost her mast, all within about 10-15 seconds.  At least 2 Scots had crew members on their fore decks with docking lines in hand when they were suddenly capsized.

Thanks to excellent rescue work by the 5 KSC powerboats on the water, all hands and all capsized and turtled boats were safely ashore within about 30 minutes, but there were no thoughts of going back out for another race.  Richard Wade of the Birmingham Sailing Club, with super crew Jim Leonard, won both Saturday races, the first handily by 30 boat lengths over Sandy and Keith Eustis of the host club, and the second shortened race by just a boat length over John Kreidler and Nathan Schultz of the Western Carolina Sailing Club.

The fleet then headed out for 3 more races in a steadily building breeze, starting at about 7 mph at 10am and ending at close to 20mph by about 12:30pm; only 14 boats stayed out for the grand finale.  Richard Wade continued his dominating performance of the day before, recording 3 more bullets on Sunday.  After that, the racing was extremely tight, with3 different competitors scoring seconds, and 4 competitors finishing within 2 points of each other for 2nd through 5th spots in the overall standings -- requiring a pair of tiebreakers to determine the final results.  The Eustises won a tiebreaker over Ed and Yvonne Craig of Chattanooga's Privateer YC for second and third places, while birthday boy John Kreidler and Nathan Shultz won a tiebreaker over Dixie Lakes District Governor Rob Fowler and daughter Maggie for fourth and fifth places.

Following the awards ceremony, the happy but mostly exhausted competitors headed home for rest and recuperation.  Andrew Fox, who finished sixth with father Doug as his crew, was spotted making off with a chunk of chocolate cake the size of a small dog – presumably enough to sustain him on the long drive back to Birmingham. Complete results are here.