Smooth Sailing at Saratoga for Some Massapoag Skippers 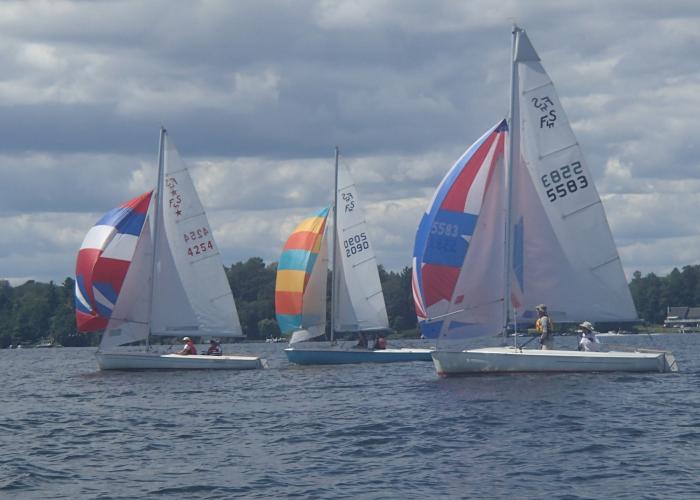 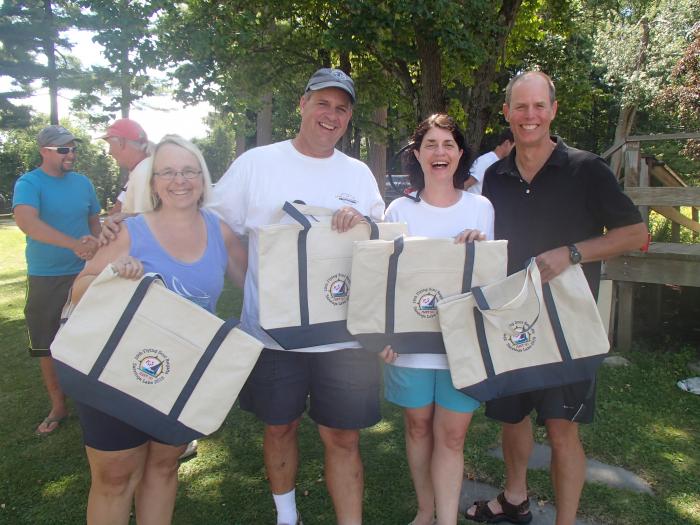 As we do each year, Greg and I trekked our way for the 20th time to Saratoga, NY, for the 29th Annual Flying Scot Invitational.  We joined fellow Massapoag Yacht Club sailors John and Connie Eckart, who were traveling to this regatta for the 1st time.  We were delighted to find that a couple of husband and wife teams from Massabesic Yacht Club in NH, Dennis and Nancy Dobe and Scott and Argelie Cunan, had also made the trip for their 1st time.  Massabesic has one of our newest fleets in New England and is hosting the New England Districts this year.  One of the skippers told me that they decided to come to Saratoga after reading previous articles of mine in Scots n’ Water!  I sure hope I have not put too much pressure on our hosts.

Saratoga Lake Sailing Club is one of the neatest places to visit.  There is room on the property to stay overnight in the house and plenty of room for camping, and several members also host visiting teams at their homes.  The hospitality at the club is always great.  We got there late on Friday night and just parked our Roadtrek, plugged it in and went to sleep.  So we missed the Friday night welcome party, but we heard it was great as usual!

On Saturday, Shirley Waterfield was there with some others helping making blueberry pancakes, or custom made pancakes for the 1 or 2 people (like me) who actually like them plain.  There were other choices for breakfast too but I think most people gravitate towards the island in the kitchen where the pancakes are being served.  No one goes hungry at this regatta.  Although your belly is full, you then make the famous “you make it, you bag it, you bring it” lunch on shore because once racing starts, you don’t come back in shore until the end of the day.  Some people can make it all day, others need a snack, but some need their lunch to make it through a whole day on the water.

The weather was beautiful, sunny and breezy and getting warm into the high 70’s, just the way we like it.  At the skippers meeting on Saturday, PRO JT Fahy said he would try to get in as many races on Saturday while there was decent wind in case the forecast for Sunday was correct and the wind would be too light.  He decided to use Olympic “O” and Gold Cup “G” courses and make them nice and long to give us all an opportunity to experience the Saratoga Lake.  With 12 boats in Championship and 8 boats in Challenger, JT and his Race Committee got in 4 decent races before calling it a day.  There was a good breeze from the northeast and it stuck most of the day, although a few legs were light and one or two races had to be shortened.  There were a few boats over early but everyone went back so no one was DSQ.  It seemed like right was the way to go and every time we did that, we made out well.  A few boats made out ok going left, but the lay line on the far right shore seemed to be the ticket.

Watching the Eckarts win the first 3 races on this day, and then take 3rd in the 4th race, we came to a conclusion – when they go the wrong way they are really fast and can catch up and recover, and when they go the right way, they are even faster and lead the pack with a horizon job nearly every time.  They are really fun to watch and sail with, and we can all learn a little something from this team that makes Massapoag proud.   The local sailors wanted to know how these new people came to their lake and figured it out so fast.  Well, John is a great skipper!

Saturday night, we all hung out and though it got chilly, maybe in the high 60’s, we were all hungry so we waited for dinner before we bundled up a bit.  As an added bonus, Harvey and Margy Davidson from Massapoag, in the area visiting relatives, paid a visit and joined us for dinner and camping for the evening.  The chicken dinner and fixings cooked by club members was tasty and the brownies were really good too.  But then it was all topped off with homemade tiramisu what you had to eat even if you were already full.  As it got darker, we all retired to our campers, tents, clubhouse or wherever we were staying, not necessarily ready to call it a night, but tired from 4 races that day.

On Sunday, lo and behold there was a very pleasant surprise – wind, once again from the Northeast.  It was a little lighter than Saturday but still good for racing.  JT and his team wanted to get in at least 2 races so they got right out there and did not waste any time.  One person noted on the dock that this club was very prompt, the harbor gun sounded at 10:00 and at 10:30 the first gun sounded for the Championship Division.  In the first race, we had wind the whole time but in the second race on the downwind leg, the wind died and the race was shortened.  Many boats were towed back into shore after trying valiantly to sail back in – we were thankful for the tow.  We were all back in and packing up by 12:30 and had a nice lunch on shore waiting for the final scores to be tallied and waiting for all us out-of-towners to get packed up.  Thanks so much to the RC for their great work on the water.

One very special note about this regatta – there were several junior skippers and crew sailing and they were very competitive!  We all enjoyed watching them race and learn, some of them skippering in their first regatta.  We’d love to see more of that everywhere we go – this is the future of our class, and these young people are an inspiration to all of us.

At the awards ceremony, the first 10 people to register all got a thank you gift to show appreciation for allowing the hosts to plan better – that is always a good thing!  Then the racing awards were given out – nice BIG embroidered bags for skippers and crew.

In the Challenger Division, the top 4 were awarded prizes: 4th - Stephen Healy and Paul Rettinger, 3rd - Scott and Argelie Cunan, who won 2 races in their first away regatta, 2nd - Tom and Danielle Dunn who won 2 races, and 1st - Jack McCarty with Mary Kate McCarty and Cameron Parry, who won 2 of the races.

In the Championship Division, the top 6 were awarded prizes: 6th – Greg and Steve Northrup, 5th – Paul Waterfield and Allen Miller who won a race, 4th – Larry and Carla Vitez sailing in a borrowed boat, 3rd – Bernie Zabek and Peter Hudson who won a race, 2nd – Greg and Diane Kampf, and 1st – John and Connie Eckart who won 4 of the 6 races!

Everyone who goes seems to love this regatta – it is fun and relaxing and the hosts are just terrific.  Thanks to Misha and Olga Gutin and Rob Hayes and their crews for everything.  Hope to see you there next year.