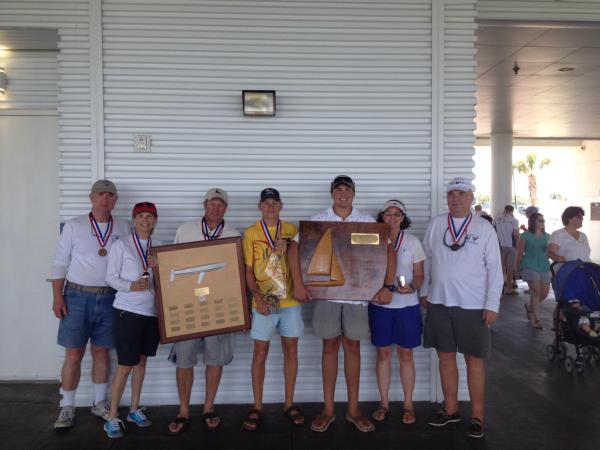 The Flying Scot Class sailed for three different perpetual trophies as part of Southern Yacht Club's annual Juby Wynne Memorial Regatta: The Commissioner General Trophy, the Charles L Dees Memorial Trophy, and, the Cock-of-the-Walk Trophy.  Each had its own individual criteria.  Whoever meets the criteria of the      sub-fleets, i.e. Districts and/or Cock-of-the-Walk (COW), first is awarded those trophies.

The Commissioner General Trophy is presented to the overall winner of the Flying Scot Class, and was won by Dwight LeBlanc IV sailing with his father, Dwilight Leblanc III, as crew.

The Charles L. Dees Memorial Trophy is presented to the winner of the FSSA Gulf District Championship, and was also won by Dwight LeBlanc IV. Second place went to Larry Taggart and crew Carrie Berger (aka "Team Alieve", and third to Nancy Claypool and crew Frank Collins.

The Cock-of-the-Walk Trophy is presented to the winner of the Gulf Yachting Association (GYA) Flying Scot Championship.  Entrants (skippers only) must be a member of a GYA Club and have a minimum crew weight of 390 pounds live weight.  This year’s winner was Eric Alber.

The first race of the 5-race series began with a gentle southeast breeze of approximately 8 knots.  But by the beginning of the second downwind leg, a few thunderstorms began to develop in the area.  The race committee wisely decided to send everyone in and wait it out.  After the storms passed through, the fleet were sent back out, but were greeted with 15 to 20 knots of northeast wind and chop. They abated only a little that afternoon.  Only 2 points separated the leaders at the end of the day!

The day concluded with a complementary keg, seafood boil, and live music. And, a gorgeous sunset!

Sunday's winds were in the 8 to 12 knot range, and mostly easterly, creating a slight shop on the shallow lake.  Larry Taggart won the first race that day, and Dwight LeBlanc, IV was second.  This led to a head-to-head showdown in the last race.  Dwight took the start and was able to camp on Larry for most of the race, even though Larry closed to within about four boat-lengths on the final downwind leg.  It was a good, exciting and enjoyable series.  Some of these photos will tell more of the story.

And a special “thank you” to the Flying Scot Foundation for supplying the medallions for the Gulf District prize winners!