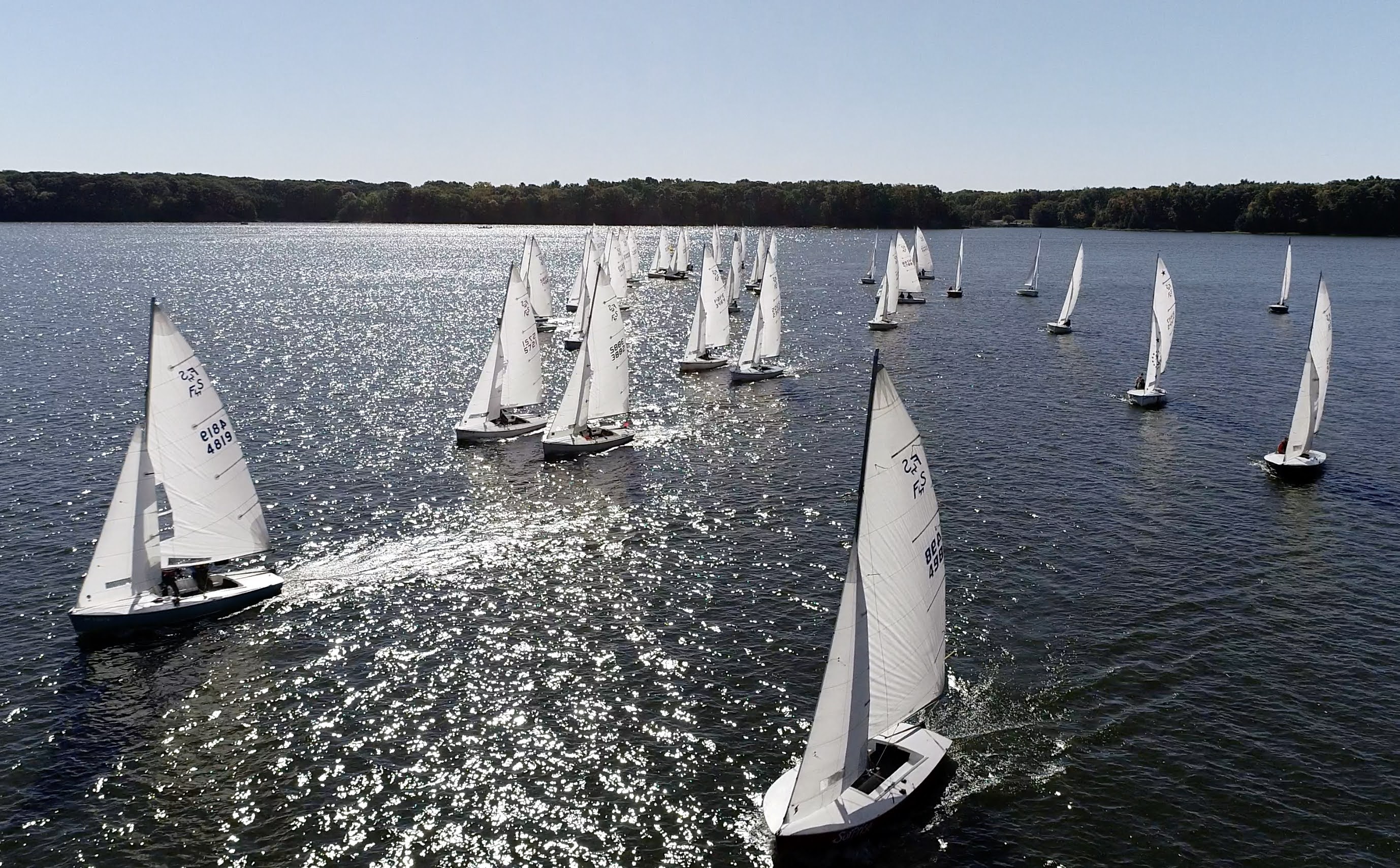 What a great weekend! 40 boats and perfect weather! Thank you to all the racers and volunteers who made this event special.

We expanded the event this year to include practice races on Wednesday and Thursday evening, a turning clinic on Thursday afternoon, a chalk talk clinic on Thursday evening after the racing and Friday clinic with FSSA North American Champ David Ames all day Friday which included 4 practice races. The feedback was overwhelmingly positive and David Ames has graciously agreed to once again offer a Friday clinic at the 2023 Glow. Our format will be the same next year so if you are able to take a long weekend, plan to come early.  Please note that we're moving the Glow up a few weeks for 2023 - we've scheduled the Glow for the weekend after labor day. 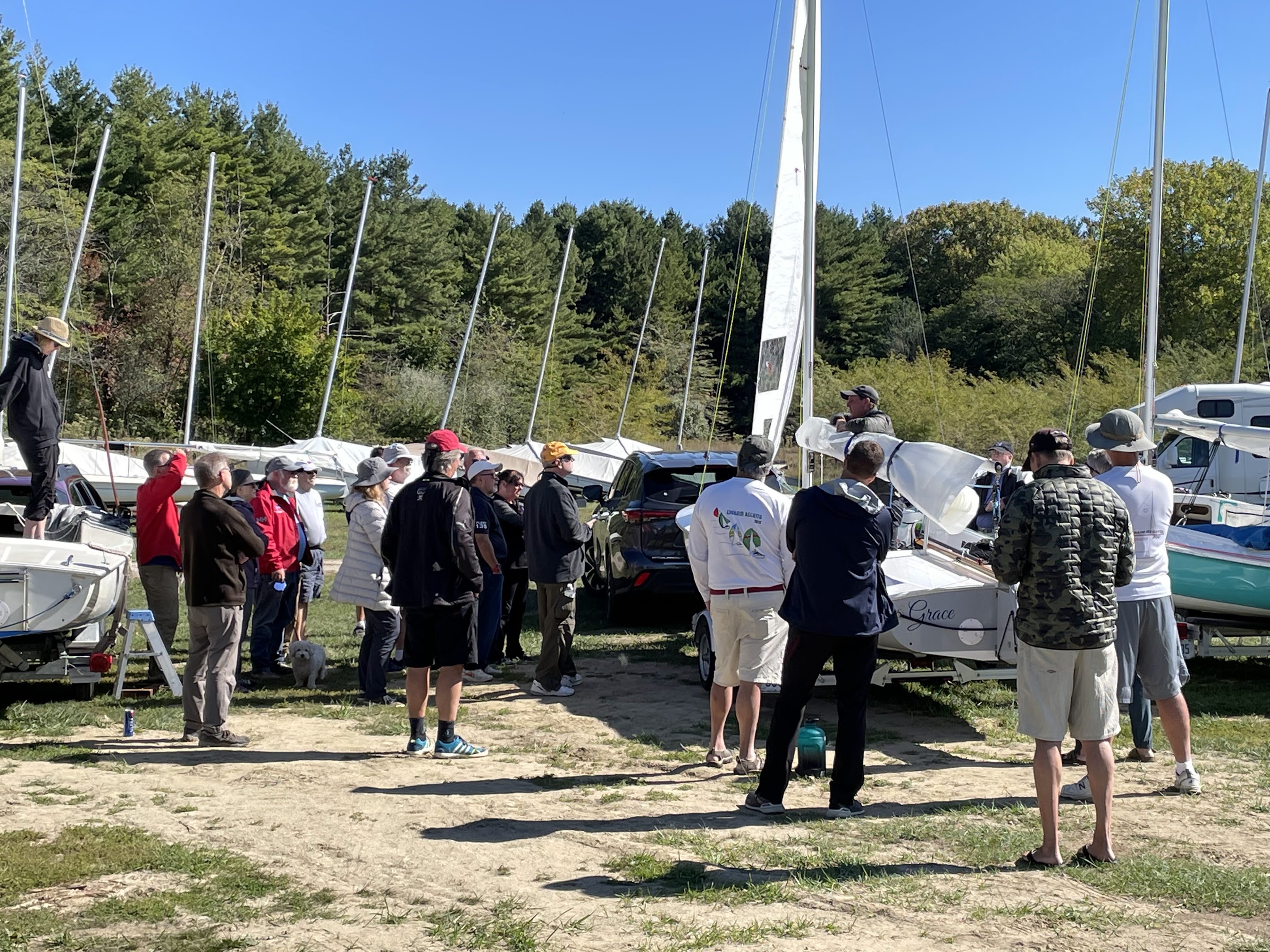 We kicked off the competitors' meeting by honoring Frank and Marianne Gerry who are retiring from sailboat racing after 40 years starting at The Harvest Moon Regatta in 1982 in the Highlander class. Tyler Andrews of Flying Scot Inc. gave a warming speech on Saturday morning at the skippers meeting that brought Marianne to tears. They were presented with a gift and large thank you card signed by Glow participants. (Frank looks back and Marianne while Tyler suprises them with a heartfelt speech. Photo courtesy of Mary Curtis)

Many participants were also wearing Rod’s Navy shirts. The Rod’s Navy concept came about a few years ago when Deb Aronson wanted to honor Rod Bussell’s (my dad) contribution to the growth of our fleet. Rod is fighting Parkinson's disease but is still in the fight and continues to sail in the Glow. Rod’s Navy has since become a symbol of how a small group of passionate sailors can become a big group of passionate sailors. Any fleet that has the desire to grow can do so and we can show you how.

The racing was fun and exciting with so many boats starting at the same time. Even though we score boats in three different scoring divisions, we prefer to start all boats together in a single start. There are few things more exciting than the 60 seconds before the start of a race with 40 boats on the line. Many racers commented this was the largest starting group they’ve ever experienced and we hope it gets even larger next year.

Herding 40 boats off a small dock and getting everyone out to the starting line on time requires everyone to ‘splash and go’ and everyone did a great job so we were able to start on time both days. As the event has grown, our club has added a second ramp and has doubled the size of our dock over the past 5 years.  We had a strong race committee team led by Nick Schneider with multiple US Sailing trained race committee volunteers supporting him. Our club has been advocating for more race committee training and we have been broadening our race committee capabilities over the past few years. We started on time. The course was square. The line was square. There was little to no downtime between races. With perfect wind conditions for racing all weekend, everything about the weekend was very smooth.

The racing was challenging with big oscillations from the NE both days and shore effects that kept everyone on their toes. Saturday winds were up and down at 6-13 and Sunday was a little lighter at 5-9 as winds started to build throughout the morning. According to one sailor, “we won the weather lottery”.  Some say the fun on shore was almost as good as the racing while some say racing was almost as good as the fun on shore. I don't know which group makes a better argument, but people enjoyed free camping, plenty of food was included with registration including breakfast lunch and a grilled steak Dinner. The cooler full of ice-cold beer was never empty and the campfire was usually raging. As I sign off, I’d like to thank the many volunteers who always do so much.  Cheers!

3. Jim and Jennifer Colegrove were the welcoming committee and setup, and brought down an extra boat so we could get more boats on the water.

4. Dan and Linda Leach transported and loaned their golf cart

6. Jodi Heckle for running the pavilion all weekend

7. Frank and Marianne Gerry for making the trophies

10. Dan Leach for helping set up the Race Committee boat on Saturday.

11. Nick Schneider, Mike Shay, and Tom Johnoson for helping out on Race Committee

13. Alan Schuele and Chris Wojnar for helping out with odds and ends

15. Tim Montague for hooking us with Starlink high speed internet

18. Jim Colegrove and Trent Johnson made the coffee each morning, and Trent started the grill to warm up the breakfast casseroles on Sunday.

19. Jim Curtis helped grill on Saturday -- cooked the chicken on the little grill.

20. Mary Curtis and Sara Hudson were great -- they asked multiple times on Saturday how they could help. Sara set out the cheese and crackers and other snacks as boats were getting off the water on Saturday, and she and Mary helped set out things for the Saturday night dinner.

22. Rick and Susan set out breakfast items on Sunday morning.

23. Heather Johnson made the two sheets of chocolate cake and sent it with Trent.

24. Bruce Kitchen for setting up Race Qs and leading the Race Qs discussion

25. Joe and Linda Budden for donating wood for the fire with delivery help from Alan Shaklee

26. Rick Wojnar for fixing ruts in the ramp on Sunday morning