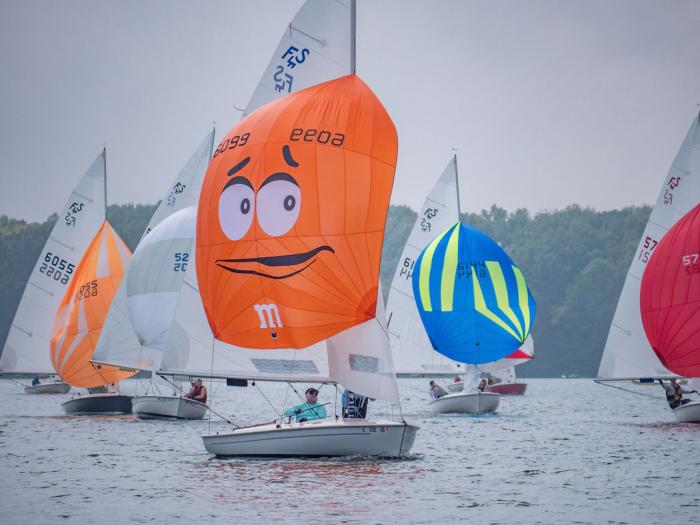 The 14th Annual Glow in the Dark II Regatta is in the books!   “The Glow” is hosted by the Clinton Lake Sailing Association and Fleet 135 and takes place on the first weekend of October.  This year we enjoyed record-breaking turnout with 34 Flying Scots competing.  Thank you to all the racers and volunteers who made the event such a great success.  The event was originally named the Glow in the Dark Regatta because Clinton Lake is a cooling lake for the nuclear plant.  The first version of the event was held between 1985-1999.   Those who were around during the 80s and 90s tell us the party was legendary.  Deb Aronson and Ben Williams reintroduced the Glow II Regatta in 2007 and it’s grown into one of the largest and most popular events on the FSSA regatta calendar.   Those who travel to Clinton Lake are treated like family and can look forward to exceptional racing, food, and fun. 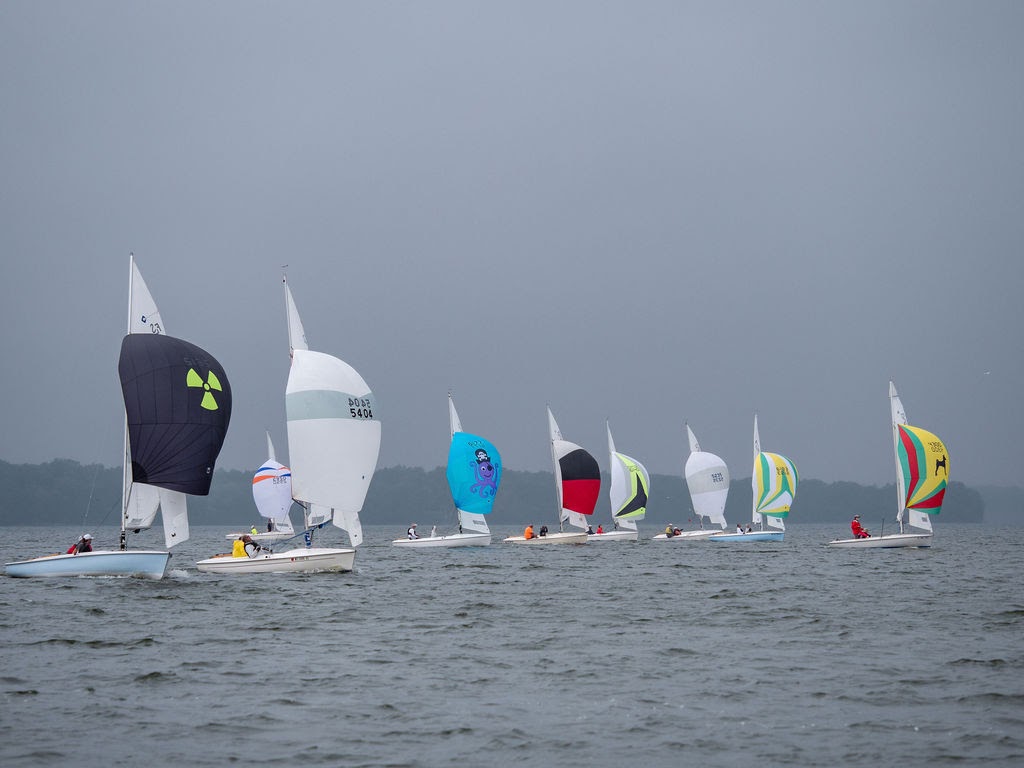 Racers arrive on Friday and are greeted by Jim and Jennifer Colegrove on the golf cart with an ice-cold Spotted Cow beer, imported specially from Wisconsin for this event.  Most people raise a tent and hunker down for the entire weekend as we provide all the food, soda and beer (and Titos Vodka) you’ll need.  Frank Gerry always brings premium Wisconsin brats for the Friday potluck cookout as friends new and old enjoy the company of sailboat racers.  It’s a fun scene on Saturday morning watching 30+ Flying Scots leave the dock to the sound of bagpipes sending us off to battle.  Saturday racing is followed by cooked-to-order steak dinners and hanging out around the fire pit.  Sunday racing is followed by burgers on the grill and finally trophies. 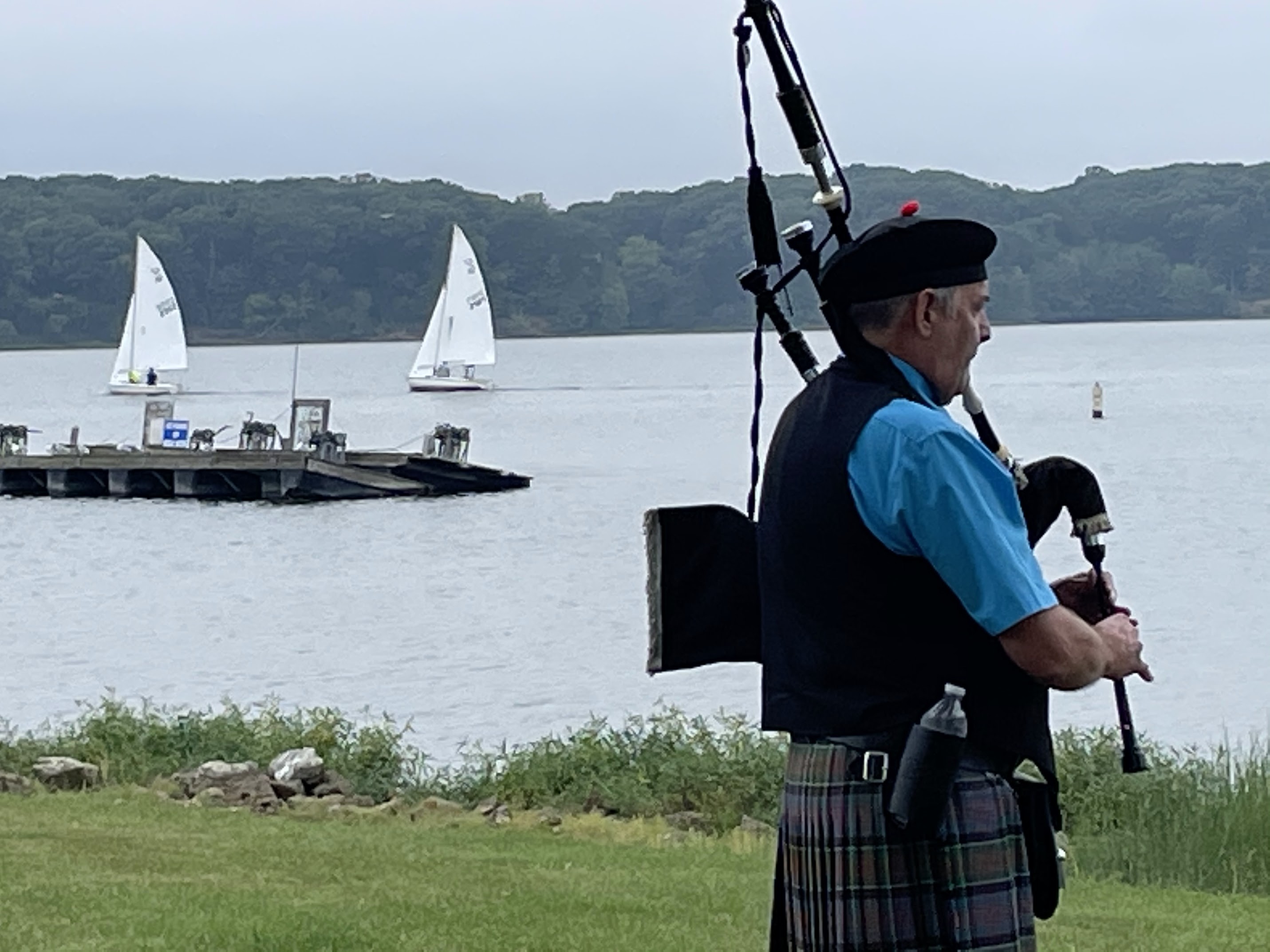 Congratulations to regatta winners Mark and Michele Tayler.  You couldn’t miss them up front with their new orange M&M spinnaker.  The weather reports on Friday looked ominous for the weekend but on Saturday we stayed dry and the wind was steady as we sailed all three scheduled races.  Not so much on Sunday as races were abandoned due to heavy rain and zero wind.   Results are posted on Regatta Network and shared below. 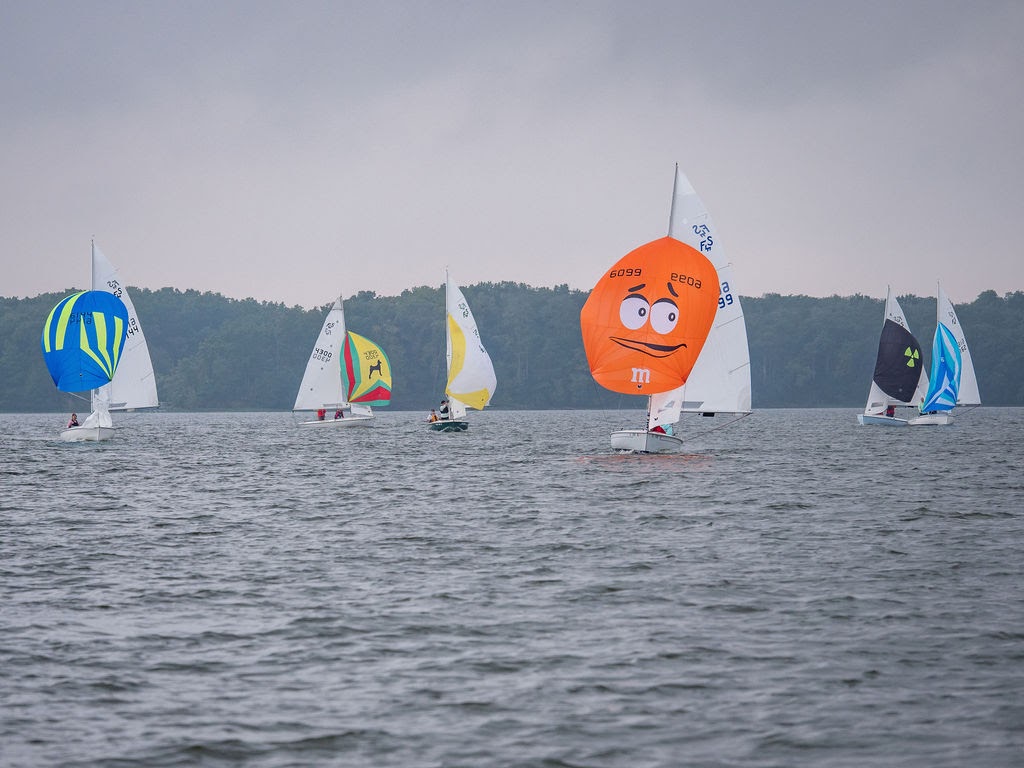 Our event is known for importing professional PROs and this year Geoff Endris from Indiana did an amazing job managing our volunteer race team.  He must have done a great job because racers went out of their way after the event to advise me we need to have him back next year.  If you are looking for a great PRO for your regatta, I highly recommend my friend Geoff. 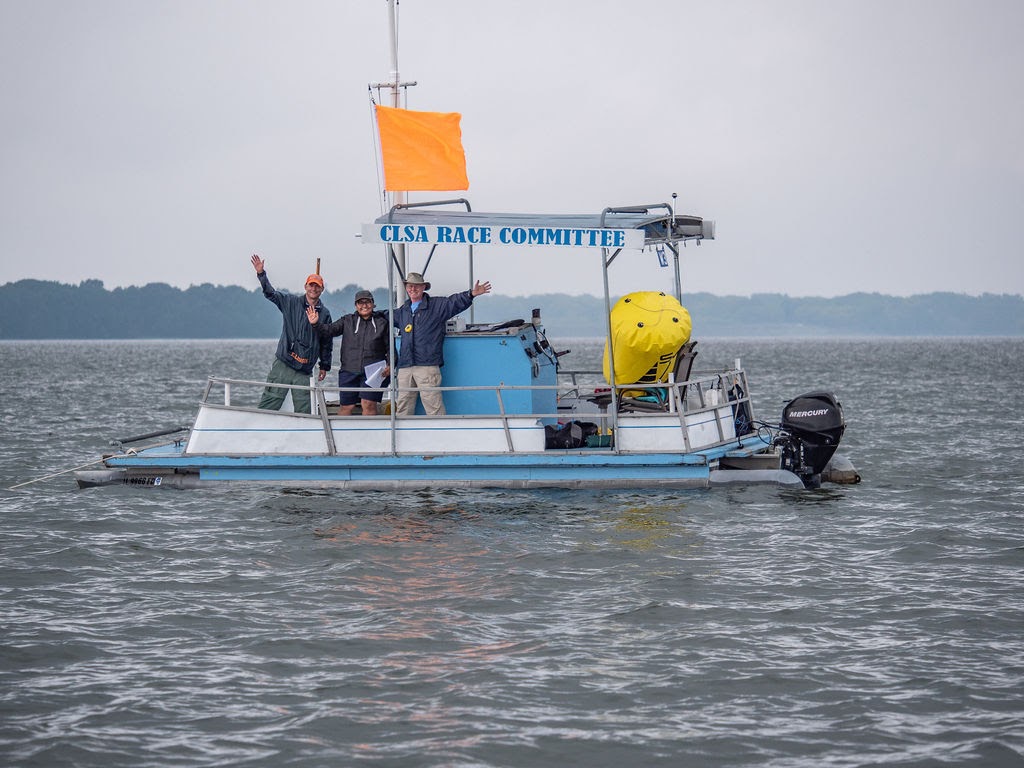 This year was a special event because Glow II Regatta founders Deb and Ben are moving to North Carolina and this is their last year racing in the event as locals.  We rewarded Deb by firing her as Regatta Chair so she could do nothing but relax.  Before dinner on Saturday, CLSA surprised her by unveiling the Deb Aronson Sailing Library in honor of her contributions to the sport of sailing, the Flying Scot class, and to the local sailing community.   Deb is a published author so the honor was fitting and those who know Deb appreciate how deserving she is of this honor.  It was a very special and emotional surprise for Deb and for her many friends who were there to share that moment with her. 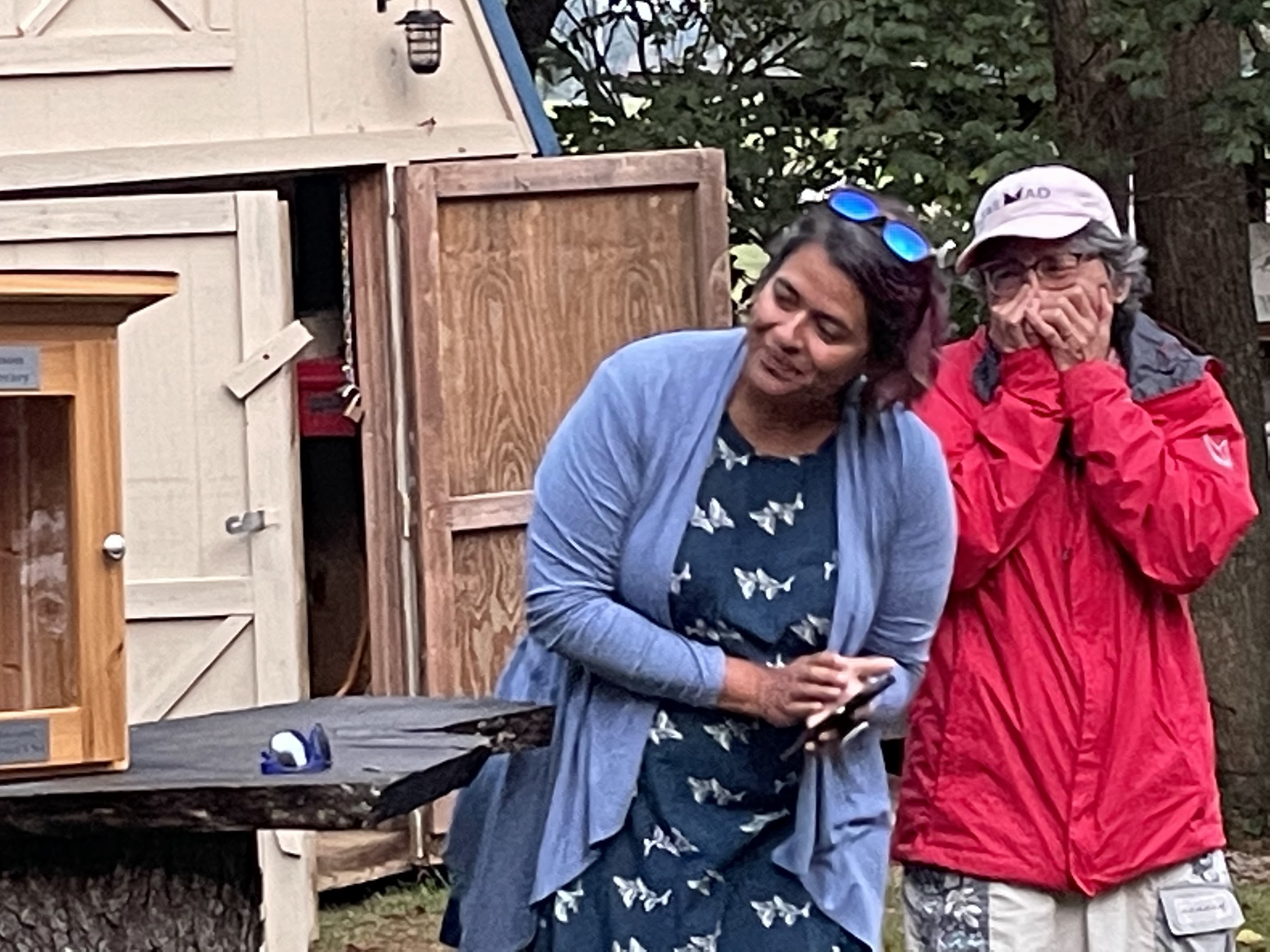 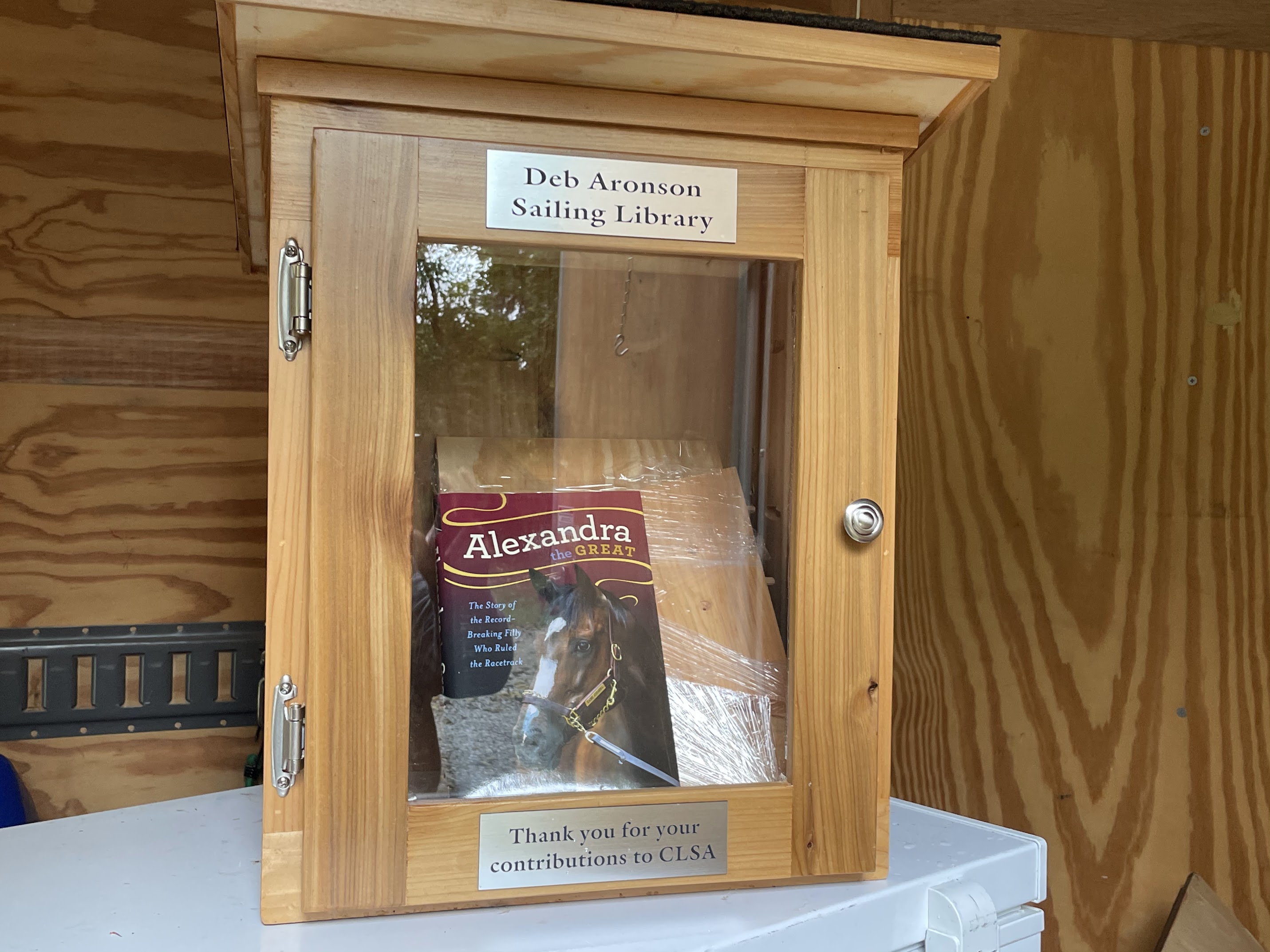 A regatta is so much more than a series of boat races.  It’s the 1000 little things we look forward to when we put on the travel covers and embark for places like Ephriam, Lake Norman, Sarasota, White Rock Lake, and the so many other great stops on the Flying Scot travel circuit.  I have tried for 10 years to explain to prospective regatta travelers what makes regattas so special and I can never do it justice.  It’s something you just have to experience to understand.  If you haven’t traveled to a regatta, I recommend you give it a try.  On the weekend of the Glow, there were well over 100 Flying Scots sailing in upwards of 10 regattas spread out all over the country.  You can find a list of Flying Scot events on FSSA.com which already includes the 2022 Glow in the Dark II Regatta on October 1 & 2.

Photos of the regatta can be viewed here courtesy of Stegmaier Photography.   Anyone at CLSA or FSSA has permission to use the pics for however you would like.  The download code is 4809.

Can you guess the names of the skippers below?   See their names here