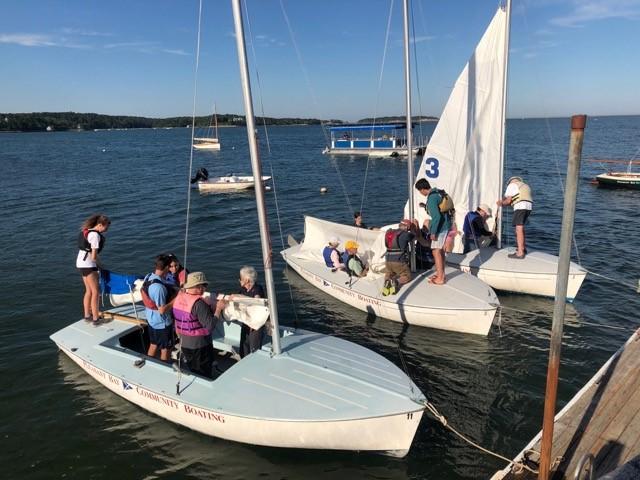 From the Decks of a Recreational Sailing Program

for Blind and Visually Impaired Students

Now in its fourth season, the Blind and Visually Impaired Sailing Program at Pleasant Bay Community Boating (PBCB) has found its sea legs. True to its mission of making boating, marine education, and environmental stewardship affordable and accessible to all, PBCB responded to a growing need in the community by developing a sailing program to reach new and seasoned sailors who are blind or visually impaired (VI).

Each sailing season begins with guide training in the parking lot, followed by guiding practice along a wooded path, down the rickety dock*, and into the cockpit of a Flying Scot. Along the way, friendships are formed over the guides’ verbal descriptions of the obstacles and the bravery shown by the adventurous blind/VI students.

After orienting these sailors on the Flying Scot, it is not long before the students are able to rig the boat, hoist the mainsail, and ready the boat for an afternoon voyage, without much help from the instructor. Once underway, the instructors orient the students using descriptions of an analog clock, with 12:00 being the bow. Thus, when sailing on a starboard reach, the students learn that the wind blows on the right cheek and ear from the direction of 3:00. When the boat is steered to a broad reach, the wind tickles the right back side of the neck, from the direction of 5:00. Sailing upwind involves not only a feel of the tiller and the sound of the luff, but also the sensation of the breeze on the side of the nose, blowing from the direction of around 1:30 to 2:00.

The Blind and Visually Impaired Sailing Program has nurtured amazing connections of avid sailors to an enthusiastic community of learners. In addition, many sighted instructors report a heightened awareness of all their senses while under sail, which enriches their own experiences on the water.

From the Vantage of Pam Groswald,

Student in the Blind and Visually Impaired Sailing Program

After many years of sailing and the loss of my husband, I thought that my sailing days were over. However, thanks to PBCB and their incredible volunteers, I am now back on the water sailing with a group of visually impaired but like-minded sailors in Flying Scots and Catboats. Our boats are donated and refurbished by staff volunteers, and our sighted guides and instructors come from PBCB and other local yacht clubs. This is a program especially well-suited to Flying Scots. These boats hold several people comfortably, they are sturdy and easy to rig, and can be used with or without a jib depending on the level of the new sailors. Sadly, we are not yet at a level of using spinnakers; but there is always hope, and we are progressing. Pleasant Bay is a wonderful bay in which to sail. We use our faces to “see” the wind and align our bodies to the center point of the tiller.

Many of our “challenged” sailors have to learn everything from scratch while also learning a new language, which can be both amusing and frustrating. So, the staff has worked hard to develop a new handbook which put all of our nautical terms on the same page. In turn, our new sailors are attempting to teach our sighted guides how to actually guide us. Saying “over here” just doesn’t work if you don’t see where “here” is!

This past summer we even attempted a man overboard exercise. It was the end of the summer, our teenage instructors had all gone back to school, and our senior instructor wanted to “try it out”. I was at the tiller, my sailing mate was frozen in place, and the man overboard was a life vest. The vest survived, but with a few bumps to its head, and we all had a good laugh, especially my teammate who was still recovering from the fear that he was the one actually going overboard.

To say that I am grateful for this opportunity to be on the water again is an understatement, and I can’t thank enough the people that donated the Flying Scots and gave of their time to let us sail them. My only wish is that other clubs would do the same.

*Please go to www.pbcb.cc to learn more about PBCB or donate funds to help replace the ‘rickety dock’ with an ADA-approved pier.