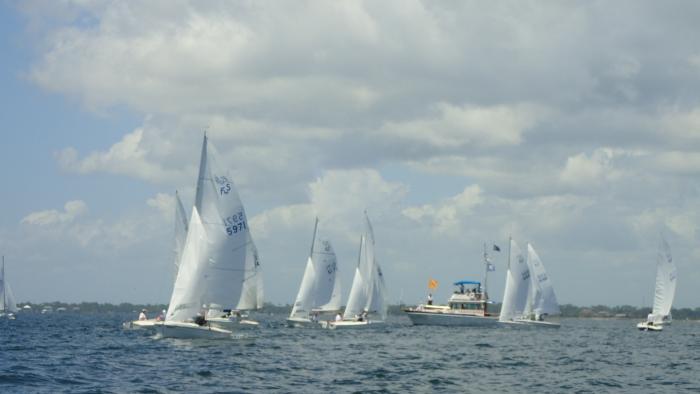 After a postpone on shore, the breeze filled in and we went out and almost started on time at 12:00 – we started just a few minutes after noon.  With a 7-10 MPH SSW wind for the first race and 10-12 MPH for the second race, Hal Smith and the RC got in 2 more great 4-leg Windward Leeward races. There was not much chop but there were confusing shifts so what seemed like the time to tack would just turn into a lift a few seconds later. With temperatures into the 90’s today in mostly sunny skies, it was a bit warmer than the previous 2 days. Staying hydrated on the water was really key and I think lots of people may be wishing they did that more.

After Day 2 of the finals, the leaders in the Championship Division are (1) Zeke and Jay Horowitz, (2) Tyler and Carrie Andrews, (3) Fred Sowaard and Oliver Byington, (4) Tom and Melanie McNally and (5) Tom and Melissa Miller. The leaders in Challenger are (1) 1) Steve and Rene Comen, (2) Bill Vogler and Mark Schillabeekz, (3) Chris Herman and crew, (4) Melissa and Eric Hemker and (5) Sally Morriss and crew.  Full results are here.

The Annual Meeting and Election is tonight.  The newly elected officers will be announced after the meeting. One more race tomorrow to determine the champions and the special award winners.