The 2013 Atlantic Coast Championships are on at Tom's River Yacht Club, Tom's River, NJ form 9/14 - 9/15/2013, with a chilly start to Day 1 - in the 50's and warming to alomst 70 degrees.   Day one also featured 0-15 MPH winds with 60-degree wind shifts.  The Race Committee managed to get in 3 races and after day 1 the leaders are Chmapionship - Rob Whiiitemore and Challenger - Greg Shafer.  Hopefully day 2 will bring steadier winds! Results to date are here  Read More

The Greater New York District Championship was held on Saturday Aug 24th at the the Westhampton Yacht Squadron in Remsenburg , Long Island. A fleet of 21 boats from Conn, NJ, and Long Island enjoyed a brisk SE wind at 10 to 15 knots.  Three races were held on windward/ leeward courses. Winds were oscillating from 120 to 130 degrees all afternoon.Long Island boats dominated the series with Frank Castellano and crew Bill Donaldson of Moriches YC  (2,1,1) followed by David Becker and... Read More 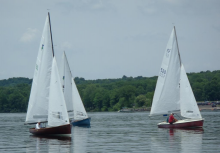