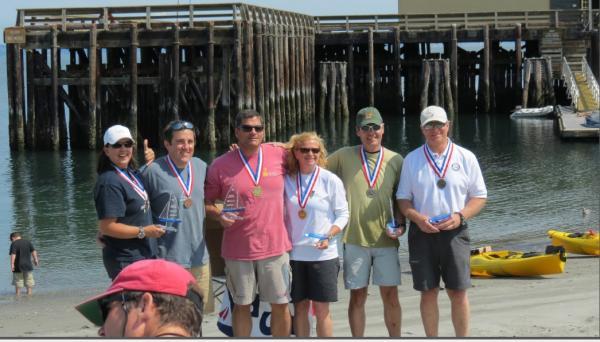 A wide range of Flying Scot build dates were evident by observing the competitors sail numbers where numbers ranged from #25 to #5472.  A total of eleven Flying Scots from Richland Washington Fleet 186 and Seattle Washington Fleet 100 competed in the two day event sailed off shore of Fort Warden State Park on the Puget Sound.  This location continues to be popular with past and present fleet members.

On Saturday, after a delayed morning race start, winds filled in quickly from the NW and built to 15 mph with gusts to 18 mph.  Three races were sailed before racing was called off due to continuing building wind velocity.  All courses were windward-leeward from a location just off the beach at Point Wilson Light to the leeward Race Committee mark, and the more distant Red Bell #2 near Port Hudson at the north end of the town of Port Townsend.  Two of the three races were sailed twice around.

The puffy winds on Saturday and current with lighter winds on Sunday presented many challenges the the sailors.  There were no throw-out races.

Individual trophies and the FSSA medals were presented to skipper and crew of the top three boats.  The trophies for the crews and the FSSA medals were a nice surprise to all present.  The planners kept that part of the award ceremony a secret.  A new (resurrected) perpetual trophy was presented to the first place finisher, it’s design and history has it’s own story to tell.