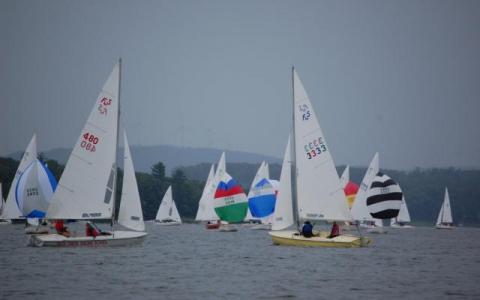 This week, the Flying Scot community is a little sadder for the loss of long-time Scot sailor Don Hott, who passed away Sunday, May 3, at age 95.  He is a founding father, a former Chief Measurer and former President of FSSA who sailed in the first 50 NACs.  As Harry Carpenter said "We lost one of the really good guys with the passing of Don". Harry had crewed... Read More

Attention all Flying Scot Sailors or anyone who wants to be a... Read More

It would seem the grail of Fleet 80's Sail for the Grail Regatta hosted by Moraine Sailing Club on Saturday Sept. 21st would overflow from the persistent rain that fell that day, but not the case. The good spirits of those on 6 MSC boats and 11 from out of town displaced that rain and filled the grail with fun, competition, and camaraderie. Every person on a Flying Scot and on the Race Committee should commend themselves for stepping out of their comfort zone and facing the elements as the... Read More

You might not think that the government shutdown could affect our sailing events, but it actually can, and it did.  The Grand Annual Regatta was scheduled to be held at Cave Run Lake, a Corps of Engineers lake in Daniel Boone National Park in Kentucky, the weekend of 10/6-10/7/2013.  However, due to The US government's partial shutdown the lake was closed!  Racing was cancelled, but not the party!  They still held a Not-a-Regatta Pig Roast in Lexington.  That'... Read More

The Deep Creek Yacht Racing Association at Deep Creek Lake in Western Maryland, held its annual Sandy Douglass Memorial Regatta on July 27 - 28, with 51 Flying Scots competing.  As is the norm with Fleet 6, the local sailors hosted off-lake sailors including Larry Taggart from New Orleans, LA, Dan Goldberg from Bethel Park, PA, and Tom Dawson from Boardman, OH, and their crews.  You can read more about the regatta in an upcoming issue of Scots n’ Water, but here are some highlights.... Read More 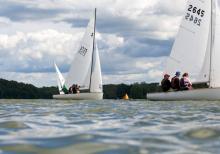